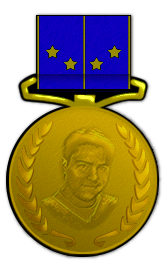 The Simming Prize is the Nobel Prize of the play-by-post online role-playing ("simming") community. (Or at least we like to think so!)

Up to five Prizes are bestowed each year to individuals or entities (games, clubs, or organizations) who (1) exemplify service, quality, and dedication within the play-by-post online role-playing; or who (2) pioneer new technology or techniques within the community. The Prizes can recognize a significant onetime accomplishment, or sustained contributions over a period of time. Individuals and entities that win a prize are entitled to use the honorific Simming Prize Laureate.

The Simming Prize is awarded annually for nominations received during the previous year.